Although it was very dangerous for African Americans to speak out against white people during the Jim Crow era, Recy Taylor refused to remain silent about sexual violence. She bravely testified against the group of white men that kidnapped and raped her. Decades later, her story has been told in both a book and a documentary film. 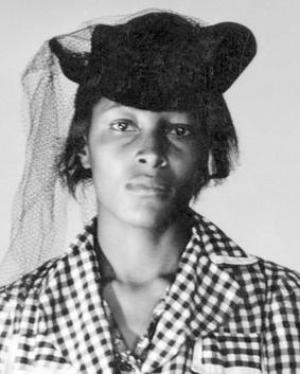 Recy Taylor was born as Recy Corbitt on December 31, 1919. She grew up in Abbeville, Alabama to a sharecropping family. When she was 17 years old, her mother died and she was left to take care of her six younger siblings. As a young woman, she married Willie Guy Taylor and in 1941, the couple welcomed their daughter Joyce Lee. The small family lived in a rented sharecropper’s cabin in the ‘colored section’ of segregated Abbeville, Alabama. When their daughter was old enough to be taken care of by friends, Recy Taylor would go to work during the day. At night, Taylor could sometimes be found sewing or sitting on the porch with her husband. On September 3, 1944 however, Taylor decided to attend a special evening service at Rock Hill Holiness Church with her friend Fannie Daniels and her son West Daniels.

As the group walked home from church together, they noticed the same car kept passing by them several times. The green Chevrolet eventually stopped beside them with seven young white men inside. All armed with guns and knives, one of the men ordered Taylor and her friends to stop walking. When they did not stop, the man pointed a shotgun at them and forced Taylor to get into the car at gunpoint. Only 24-years-old at the time, Taylor was abducted by the men and taken to the woods. She begged to be returned home to her husband and daughter, but the men threatened to kill her and leave her in the woods. The men proceeded to blindfold her and six of them brutally raped her. She was then dumped out of the car on the side of the highway. Taylor survived the horrific attack and immediately tried to find her way home. Little did she know, right after she was kidnapped her friend Fannie Daniels reported the incident the authorities. Unable to find the Sheriff, Daniels found Will Cook, who was the former chief of police, and Taylor’s father, Benny Corbitt. Cook and Corbitt went out searching for Taylor and eventually found her on a road near the center of Abbeville. By the time they found her it was almost three in the morning. They took her back to Cook’s shop where her husband, the Daniels, and two police officers were waiting for her.

Taylor bravely reported the violent attack to the police. Fannie and West Daniels were able to track down the Henry County Sheriff, George Gamble. Although Taylor did not know the name of her assailants at the time, she was able to identify the car that they were in. That specific car belonged to one person in town, and the sheriff was able to identify right away that the owner was Hugo Wilson. When the sheriff brought him back to Cook’s store, Taylor identified Wilson as one of the rapists. Wilson was taken to the jailhouse and he confessed to participating in the attack. He gave up the names of his accomplices including; U.S. Army Private Herbert Lovett, Billy Howerton, Dillard York, Luther Lee, Joe Culpepper and Robert Gamble. Wilson insisted that because they paid her, their kidnapping and brutalization could not be considered rape. After his confession, the sheriff released Wilson and sent him home. The next day, Taylor’s house was set on fire by white vigilantes. The Taylor family moved in with her father and siblings.

Even though Taylor reported the crime, witnesses confirmed her story, and one of the men confessed, the men were not brought into custody. Outraged by this injustice, the National Association for the Advancement of Colored People (NAACP) in Montgomery, Alabama got involved with the case. They sent activist Rosa Parks to investigate further and support the family. On October 3-4, 1944 an all-white, all-male grand jury heard Taylor’s case. After five minutes of deliberation, the jury dismissed the case. The NAACP and African Americans around the country continued to advocate for justice for Recy Taylor. Parks along with other activists formed the “Committee for Equal Justice for Mrs. Recy Taylor,” to raise awareness. With the help of voices such as W. E. B. DuBois, Mary Church Terrell, and Langston Hughes, the governor sent investigators and a second grand jury was held on February 14, 1945. By that time, three more of the men confessed to raping Taylor, but none of them were prosecuted.

In 2011, historian Danielle L. McGuire included Taylor’s story in her book entitled, At the Dark End of the Street: Black Women, Rape, and Resistance—a New History of the Civil Rights Movement from Rosa Parks to the Rise of Black Power. As a result, the Alabama Legislature issued a formal apology to Taylor almost 70 years after her assault. Recy Taylor died in her sleep on December 28, 2017, three weeks after the release of the documentary film The Rape of Recy Taylor.