Growing up in a royal family, Queen Lili‘uokalani was trained to be a monarch. Even though becoming queen was probably not a surprise to her, she may not have known that she would also become the last sovereign monarch of the Kingdom of Hawaii. Unfortunately, she was only able to reign for three years because the United States overthrew the Hawaiian monarchy. However, Lili‘uokalani published her side of the story in a memoir that became the only autobiography written by a Hawaiian monarch. 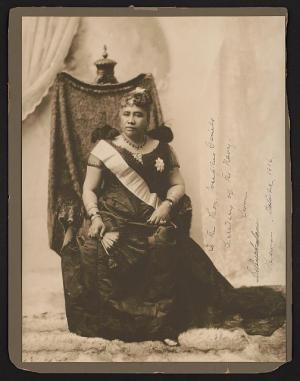 Queen Lili‘uokalani was born on September 2, 1838 in Hawaii to a wealthy and high-class family. Her full birth name was Lydia Lili‘u Loloku Walania Wewehi Kamaka‘eha. According to Hawaiian customs, Lili‘uokalani was adopted by extended members of her family. She started attending the Royal School and learned English at the age of four. Lili‘uokalani and all of her classmates were seen as contenders to one day take the Hawaiian throne. In addition, she was often surrounded by royalty because her mother was an advisor to the King of Hawaii. After finishing her exams at the Royal School in 1853, Lili‘uokalani traveled with the royal court and was sometimes referred to as the “the highest unmarried woman in the Kingdom.” However this changed by 1860, when Lili‘uokalani and American royal aide named John Owen Dominis got engaged. The couple got married two years later, but Lili‘uokalani wrote in her memoir that they had an unhappy marriage. They never had children together, but Lili‘uokalani adopted three children, while Dominis had a child with one of her servants.

Lili‘uokalani and her family remained in the inner circle of the royal court and frequently worked on charity projects with the king and queen. In 1872, the King of Hawaii died without naming a successor. This king was the last of the Kamehameha kings, so according to the Hawaiian constitution, a new king would be elected by the legislature. King Lunalilo became the next royal to take the throne until 1874. Unfortunately, he also died without naming a successor, a year after becoming king. Lili‘uokalani’s brother David Kalākaua was elected as the next King of Hawaii and won against the former Queen Emma (wife to Kamehameha IV). Supporters of Queen Emma protested the results of this election, and many of them had to be imprisoned. This was only the beginning of the political unrest. While Lili‘uokalani’s brother was the king, settlers and sugar planters from the United States wanted to control more of Hawaii. They used their power and influence to force Kalākaua to sign a new constitution that took most of the power away from the monarchy. By the time Kalākaua died in 1891, royal officials had very little power.

When Lili‘uokalani’s brother died, she was the next rightful heir to the Hawaiian throne. On January 29, 1891, Lili‘uokalani was sworn in as queen. One of her main goals was to reestablish the power and sovereignty of the monarchy that her brother had to give up. First, she successfully fought for the resignation of her brother’s former staff. When they initially refused, she took it to the Hawaii Supreme Court, and they ruled in her favor. She also restored her supporters to positions that they lost due to the political changes. Lili‘uokalani’s next step was to re-write the constitution and restore the monarchy to its former glory. Unfortunately, this posed a threat to American businessmen, so they organized a coup d'état and overthrew Queen Lili‘uokalani. Although she tried for several years to regain her throne through the United States court systems, Americans had a different plan in mind. With the Queen overthrown, the militia was able to seize Hawaii and it was officially annexed as a territory to the United States in July of 1898.

That same year, Lili‘uokalani published her memoir entitled Hawaii’s Story by Hawaii’s Queen, which became the only autobiography written by a Hawaiian monarch. She discusses several monumental events including her rise to the throne, the overthrow of the monarchy, and her arrest and trial in 1895 for suspected treason. She spent the rest of her life fighting for native Hawaiians to regain power and autonomy over their land. On November 11, 1917, Queen Lili‘uokalani died in her bed at age seventy-nine.