At age eleven, Malala Yousafzai was already advocating for the rights of women and girls. As an outspoken proponent for girls’ right to education, Yousafzai was often in danger because of her beliefs. However, even after being shot by the Taliban, she continued her activism and founded the Malala Fund with her father. By age seventeen, Yousafzai became the youngest person to receive the Nobel Peace Prize for her work. 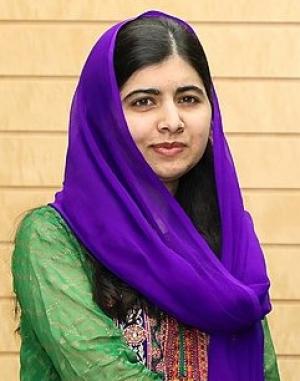 Malala Yousafzai was born on July 12, 1997 in Mingora, Pakistan. Mingora is the largest city in the Swat Valley of the Khyber Pakhtunkhwa Province in Pakistan. Yousafzai was the first of three children born to Ziauddin and Tor Pekai Yousafzai. Although it was not always easy to raise a girl child in Pakistan, Malala Yousafzai’s father insisted that she received all of the same opportunities afforded to boy children. Her father was a teacher and education advocate that ran a girls’ school in their village. Due to his influence, Yousafzai was passionate about knowledge from a very young age, and she would often waddle into her father’s classes before she could even talk. However, by the time she was ten years old, Taliban extremists began to take control of the Swat Valley and many of her favorite things were banned. Girls were no longer able to attend school, and owning a television, playing music and dancing were all prohibited. Girl’s education was specifically targeted by the Taliban and by the end of 2008 they had destroyed over 400 schools. At eleven years old, Yousafzai decided to stand up to the Taliban.

Yousafzai started by blogging anonymously for the British Broadcasting Corporation (BBC) in early 2009. She used the penname, “Gul Makai,” and spoke about her life under Taliban rule and how much she wanted to attend school. Her first BBC diary entry entitled, “I Am Afraid,” detailed her nightmares about a full-blown war in her hometown. Her nightmares started to become reality, as Yousafzai and her family were soon forced to leave their home due to rising tensions between Pakistan and the Taliban. This did not stop Yousafzai from advocating for her right to attend school. Over the next few years, she and her father began speaking out on behalf of girls’ education in the media. They campaigned for Pakistani girls’ access to a free quality education. By 2011, Yousafzai was nominated for the International Children’s Peace Prize. Although she did not win, that same year she earned Pakistan’s National Youth Peace Prize. Yousafzai was now a household name. However, this also made her a target.

On October 9, 2012, fifteen-year old Yousafzai was on the bus returning from school with her friends. Two members of the Taliban stopped the bus and asked, “Who is Malala?” When they identified Yousafzai, they shot her in the head. Fortunately, she was airlifted to a Pakistani military hospital and then taken to an intensive care unit in England. After ten days in a medically induced coma, Yousafzai woke up in a hospital in Birmingham, England. She had suffered no major brain damage, but the left side of her face was paralyzed, and she would require many reparative surgeries and rehabilitation. After months of medical treatment, Yousafzai was able to return to her family that now lived in England. In March 2013, Yousafzai began attending school in Birmingham. Although she was now able to attend school in England, she decided to keep fighting “until every girl could go to school.”[1] On her sixteenth birthday, Yousafzai spoke at the United Nations in New York. That same year she published her autobiography entitled, “I Am Malala: The Girl Who Stood Up for Education and Was Shot by the Taliban.” She was awarded the Sakharov Prize for Freedom of Thought by the European Parliament for her activism.

In 2014, Yousafzai and her father established the Malala Fund to internationally support and advocate for women and girls. Through her charity, she met with Syrian refugees in Jordan, young women students in Kenya, and spoke out in Nigeria against the terrorist group Boko Haram that abducted young girls to stop them from going to school. In December of 2014, Yousafzai was awarded the Nobel Peace Prize for her work. At age seventeen, she became the youngest person to be named a Nobel laureate. Since then, Yousafzai has continued to advocate for the rights of women and girls. The Malala Fund advocates for quality education for all girls by funding education projects internationally, partnering with global leaders and local advocates, and pioneering innovative strategies to empower young women. Yousafzai is currently studying Philosophy, Politics and Economics at the University of Oxford.