Adelina Otero-Warren, the first Hispanic woman to run for U.S. Congress and the first female superintendent of public schools in Santa Fe, was a leader in New Mexico’s woman’s suffrage movement. She emphasized the necessity of Spanish in the suffrage fight to reach Hispanic women and spearheaded the lobbying effort to ratify the 19th amendment in New Mexico. She strove to improve education for all New Mexicans, working especially to advance bicultural education and to preserve cultural practices among the state’s Hispanic and Native American communities. 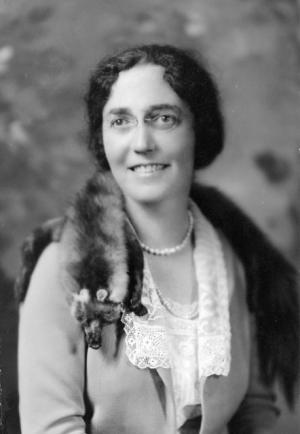 María Adelina Isabel Emilia Otero was born on October 23, 1881 on her family’s hacienda, “La Constancia,” near Los Lunas, New Mexico. Her parents, Manuel B. Otero and Eloisa Luna, each belonged to prominent, politically connected Hispano families that traced their lineages back to the area’s early Spanish colonizers. She was not yet two when her father was killed by an Anglo squatter seeking to encroach on her family’s land. Her mother remarried in 1886 and Otero became the second eldest of 12 children. She received a formal education at St. Vincent’s Academy in Albuquerque and Maryville College of the Sacred Heart (now Maryville University) in St. Louis but returned to the family’s hacienda when she was 13 to help care for her younger siblings. In 1897, her family moved to Santa Fe when her second cousin, Miguel Otero II, became the governor of the New Mexico Territory and appointed her stepfather as a judicial clerk. During this period, Otero (who went by “Nina” in adulthood) socialized among the political and cultural elite of Santa Fe.

In 1907, Otero met Rawson D. Warren, an officer in the Fifth U.S. Cavalry stationed at Fort Wingate. Otero and Warren married the following year and moved to Fort Wingate, but two years later Otero-Warren divorced her husband and returned to Santa Fe. Due to the prejudices against divorced women at the time, Otero-Warren maintained that she was a widow and continued to use her hyphenated name.

Otero-Warren moved to New York City in 1912 to help keep house for her brother who was studying at Columbia University. While there, she gained experience working in the settlement house movement. Following her mother’s death in 1914, Otero-Warren moved back to Santa Fe to once again care for her younger siblings.

In Santa Fe, Otero-Warren became active in the woman’s suffrage movement and stressed the need to advocate for suffrage in Spanish as well as English. She insisted that suffrage materials be published in both languages to reach the large population of Spanish-speaking women in New Mexico. In 1916, Otero-Warren was elected vice-chair of the newly formed New Mexican branch of the Congressional Union, soon to be the National Woman’s Party (NWP). When the chair stepped down in 1917, Otero-Warren took over the role at the request of NWP leader Alice Paul. She also served as chair of the New Mexico Republican State Committee’s women’s division and as chair of the Legislative Committee of the New Mexico Federation of Women’s Clubs. Otero-Warren used her political connections and leverage to campaign for woman’s suffrage and to forcefully lobby the state legislature to ratify the 19th Amendment, which it did on February 21, 1920.

In 1917, Otero-Warren was appointed superintendent of public schools in Santa Fe. She defeated a male opponent to win reelection to the position in 1918 and remained in the role until 1929. As superintendent, Otero-Warren focused on promoting adult education programs, setting up a county high school, raising teacher standards as well as their salaries, and improving the physical conditions of schools. Fueled by her pride in her Spanish cultural heritage, she opposed the federal government’s trend toward assimilating non-Anglos into white America. She encouraged bicultural education and fought to preserve the study of Hispano arts and crafts. For several years in the 1920s, Otero-Warren also served as Santa Fe’s County Inspector of Indian Schools. In that role, she criticized the federal government for the poor condition of the schools and argued that the boarding schools threatened Indian family life and cultural stability. Otero-Warren, known in the state as a dedicated and skilled public servant, also took part in numerous commissions and boards devoted to public health and welfare during this time.

Otero-Warren became the first Hispanic woman to run for Congress when she won the Republican Party’s nomination in 1922 (again defeating a male opponent). However, she lost the general election by fewer than 10,000 votes, in part due to the public’s discovery that she was divorced rather than widowed. She never again ran for public office, but continued to work in government, serving as New Mexico’s director of literacy education for the Civilian Conservation Corps in the 1930s and director of the Works Progress Administration in Rio Piedras, Puerto Rico in the 1940s. During World War II, she ran the Santa Fe County Office of Price Administration, charged with enforcing the federal government’s price controls.

In the early 1930s, together with her partner, Mamie Meadors, Otero-Warren homesteaded 1,257 acres of land just northwest of Santa Fe, which they named Las Dos (“The Two Women”) Ranch. In 1936, Otero-Warren published Old Spain in Our Southwest, a book of stories from her childhood in Los Lunas. She and Meadors established Las Dos Realty and Insurance Company in 1947. Meadors died in 1951, but Otero-Warren ran the ranch and the business until her death in 1965.