If you’ve ever wondered why you’ve been struggling a little too hard for a little too long with chronic emotional and physical health conditions that just won’t abate, or feeling as if you’ve been swimming against some invisible current that never ceases, a new field of scientific research may offer hope, answers, and healing insights.

In 1995, physicians Vincent Felitti and Robert Anda launched a large-scale epidemiological study that probed the child and adolescent histories of 17,000 people, comparing their childhood experiences to their later adult health records. The results were shocking: Nearly two-thirds of individuals had encountered one or more adverse childhood experiences (ACEs)—a term Felitti and Anda coined to encompass the chronic, unpredictable, and stress-inducing events that many children face.
These included growing up with a depressed or alcoholic parent; losing a parent to divorce or other causes; or enduring chronic humiliation, emotional neglect, or sexual or physical abuse. These forms of emotional trauma went beyond the typical, everyday challenges of growing up. (For stories of those who faced childhood adversity, see these videos on Laura and John, two patients featured in my newest book,Childhood Disrupted: How Your Biography Becomes Your Biology, and How You Can Heal.)

The number of adverse childhood experiences an individual had predicted the amount of medical care she’d require as an adult with surprising accuracy:

You can take the ACE Questionnaire here to find out more about how you score.

The ACE Study tells us that experiencing chronic, unpredictable toxic stress in childhood predisposes us to a constellation of chronic conditions in adulthood. But why? Today, in labs across the country, neuroscientists are peering into the once inscrutable brain-body connection, and breaking down, on a biochemical level, exactly how the stress we face when we’re young catches up with us when we’re adults, altering our bodies, our cells, and even our DNA. What they’ve found may surprise you.

Some of these scientific findings can be a little overwhelming to contemplate. They compel us to take a new look at how emotional and physical pain are intertwined. (For more on why I wrote about how ACEs can change the way we see illness and how we do medicine, see this video.)

When we’re thrust over and over again into stress-inducing situations during childhood or adolescence, our physiological stress response shifts into overdrive, and we lose the ability to respond appropriately and effectively to future stressors—10, 20, even 30 years later. This happens due to a process known as gene methylation, in which small chemical markers, or methyl groups, adhere to the genes involved in regulating our stress response, and prevent these genes from doing their jobs. As the function of these genes is altered, the stress response becomes re-set on “high” for life, promoting inflammation and disease.

This can make us more likely to over-react to the everyday stressors we meet in our adult life—an unexpected bill, a disagreement with a spouse, or a car that swerves in front of us on the highway, and creates more inflammation. This, in turn, predisposes us to a host of chronic conditions, including autoimmune disease, heart disease, cancer, and depression.

Indeed, Yale researchers recently found that children who’d faced chronic toxic stress showed changes “across the entire genome,” in genes that not only oversee the stress response, but also in genes implicated in a wide array of adult diseases. This new research on early emotional trauma, epigenetic changes, and adult physical disease breaks down longstanding barriers between what the medical community has long seen as “physical” disease versus what is “mental” or “emotional.”

2. Size and Shape of the Brain

Scientists have found that when the developing brain is chronically stressed, it releases a hormone that actually shrinks the size of the hippocampus, an area of our brain responsible for processing emotion and memory and managing stress. Recent magnetic resonance imaging (MRI) studies suggest that the higher an individual’s ACE score, the less gray matter she or he has in other key areas of the brain, including the prefrontal cortex, an area related to decision-making and self-regulatory skills, and the amygdala, or fear-processing center. Kids whose brains have been changed by their adverse childhood experiences are more likely to become adults who find themselves over-reacting to even minor stressors.

Children have an overabundance of neurons and synaptic connections; their brains are hard at work, trying to make sense of the world around them. Until recently, scientists believed that the pruning of excess neurons and connections was achieved solely in a “use-it-or-lose-it” manner, but a surprising new player in brain development has appeared on the scene. Non-neuronal brain cells—known as microglia, which make up one-tenth of all the cells in the brain and are actually part of the immune system—participate in the pruning process. These cells prune synapses like a gardener prunes a hedge. They also engulf and digest entire cells and cellular debris, thereby playing an essential housekeeping role.

But when a child faces unpredictable chronic stress of adverse childhood experiences, microglial cells “can get really worked up and crank out neurochemicals that lead to neuroinflammation,” says Dr. Margaret McCarthy, whose research team at the University of Maryland Medical Center studies the developing brain. “This below-the-radar state of chronic neuroinflammation can lead to changes that reset the tone of the brain for life.”

That means that kids who come into adolescence with a history of adversity and lack the presence of a consistent, loving adult to help them through it may become more likely to develop mood disorders or have poor executive functioning and decision-making skills.

Early trauma can make children seem “older” emotionally than their peers. Now, scientists at Duke University, the University of California, San Francisco, and Brown University have discovered that adverse childhood experiences may prematurely age children on a cellular level as well. Adults who’d faced early trauma show greater erosion in what are known as telomeres—the protective caps that sit on the ends of DNA strands, like the caps on shoelaces, to keep the genome healthy and intact. As our telomeres erode, we’re more likely to develop disease, and our cells age faster.

Inside each of our brains, a network of neurocircuitry, known as the “default mode network,” quietly hums along, like a car idling in a driveway. It unites areas of the brain associated with memory and thought integration, and it’s always on standby, ready to help us figure out what we need to do next. “The dense connectivity in these areas of the brain help us to determine what’s relevant or not relevant, so that we can be ready for whatever our environment is going to ask of us,” explains Dr. Ruth Lanius, neuroscientist, professor of psychiatry, and director of the Post-Traumatic Stress Disorder (PTSD) Research Unit at the University of Ontario.

But when children face early adversity and are routinely thrust into a state of fight or flight, the default mode network starts to go offline; it’s no longer helping them figure out what’s relevant, or what they need to do next. According to Lanius, kids who’ve faced early trauma have less connectivity in the default mode network—even decades after the trauma occurred. Their brains don’t seem to enter that healthy idling position—and so they may have trouble reacting appropriately to the world around them.

Until recently, it’s been scientifically accepted that the brain is “immune-privileged,” or cut off from the body’s immune system. But that turns out not to be the case, according to a groundbreaking study conducted by researchers at the University of Virginia School of Medicine. Researchers found that an elusive pathway travels between the brain and the immune system via lymphatic vessels. The lymphatic system, which is part of the circulatory system, carries lymph—a liquid that helps to eliminate toxins, and moves immune cells from one part of the body to another. Now we know that the immune system pathway includes the brain.

The results of this study have profound implications for ACE research. For a child who’s experienced adversity, the relationship between mental and physical suffering is strong: the inflammatory chemicals that flood a child’s body when she’s chronically stressed aren’t confined to the body alone; they’re shuttled from head to toe.

Dr. Ryan Herringa, neuropsychiatrist and assistant professor of child and adolescent psychiatry at the University of Wisconsin, found that children and teens who’d experienced chronic childhood adversity showed weaker neural connections between the prefrontal cortex and the hippocampus. Girls also displayed weaker connections between the prefrontal cortex and the amygdala. The prefrontal-cortex-amygdala relationship plays an essential role in determining how emotionally reactive we’re likely to be to the things that happen to us in our day-to-day life, and how likely we are to perceive these events as stressful or dangerous.

“If you are a girl who has had adverse childhood experiences and these brain connections are weaker, you might expect that in just about any stressful situation you encounter as life goes on, you may experience a greater level of fear and anxiety.”

Girls with these weakened neural connections, Herringa found, stood at a higher risk for developing anxiety and depression by the time they reached late adolescence. This may, in part, explain why females are nearly twice as likely as males to suffer from later mood disorders.

This science can be overwhelming, especially to those of us who are parents. So, what can you do if you or a child you love has been affected by early adversity? The good news is that, just as our scientific understanding of how adversity affects the developing brain is growing, so is our scientific insight into how we can offer the children we love resilient parenting, and how we can all take small steps to heal body and brain. Just as physical wounds and bruises heal, just as we can regain our muscle tone, we can recover function in under-connected areas of the brain. The brain and body are never static; they are always in the process of becoming and changing.

Find out more about Donna Jackson Nakazawa'smost recent book, Childhood Disrupted: How Your Biography Becomes Your Biology, and How You Can Heal, follow  on Facebook and Twitter, or subscribe to her blog at DonnaJacksonNakazawa.com. Stay tuned for Part II: Recovering from Post Childhood Adversity Syndrome—How Do We Come Back to Who We Really Are? where we’ll talk about what we can do, and the powerful science of how to heal. 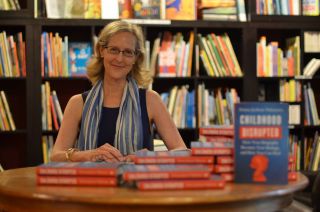 Donna thank you for posting. You were able to capture complicated information about the brain and body in an easily digestable format. So useful!

Donna - can this blog post be re-posted on other websites?  I belong to a non-profit - Ashlar Center for Narrative Arts - and we would love to feature information on ACES. This would be the perfect article.  Just let me know if permitted.  Thank you!